Just two quoted sentences as a suggestion to read the whole story here:

‘The divide between people who have internet access and those who do not is deepening existing inequalities — inequalities that pose a serious global threat.’

‘The web that many connected to years ago is not what new users will find today.’

DAVID GELERNTER (lifestreams.com) wrote an article in Wired 02.01.13 with a very definitive title:

The End of the Web, Search, and Computer as We Know It

‘ … today, the most important function of the internet is to deliver the latest information, to tell us what’s happening right now. That’s why so many time-based structures have emerged in the cybersphere: to satisfy the need for the newest data. Whether tweet or timeline, all are time-ordered streams designed to tell you what’s new.’ …’ By adding together every timestream on the net — including the private lifestreams that are just beginning to emerge — into a single flood of data, we get the worldstream: a way to picture the cybersphere as a whole. No one can see the whole worldstream, because much of the information flowing through it is private. But everyone can see part of it.

This future doesn’t just kill the operating system, browser, and search as we know it — it changes the meaning of “computer” as we know it, too. Whether large or small (e.g., a smartphone), a computer’s main function in the near future will be tuning in to — as a car radio tunes in a broadcast station — the constantly flowing global cyberflow. We won’t care much about the computer devices themselves since we’ll be more focused on the world of information … and our lives as attached to it.’

Trivial, revolutionary? A Fact to be considered!

Given all the already existing stream aggregators like Squirro, netvibes, Flipboard, Google Currents etc. etc. does this not sound quite trivial? May be, but it’s a fact to be considered in designing information sites. What’s the role of static websites, RSS feeds, SEO, linked twitter accounts and all the social media in the context of this (not so) new user behaviour?

Will we use in the future mainly virtual websites built on (semantic) searches adapted to our interests … and going to specific websites only (and rarely) when there’s a need to dig deeper?  Challenging situation!

A timeline is a perfect tool for visualising complex information … and is sometimes quite complex itself. This example from evolutionoftheweb gives both. And it shows interesting details like the evolution of Flash and SVG over time.

There are not only interactive graphs, but also interactive ads using facebook. And you may start doubting. …. What is real?

Happy New Year! One of the things I am looking forward to in 2012 is yet more improvements in the no-longer-humble web browser. The move towards ‘web apps’ has made browser manufacturers focus on the speed at which users can interact with a page (usually this is done via javascript). This has brought with it remarkable improvements to the usability of complex, interactive data graphics.  By way of example, I’d point you to the following page, making sure you are using a modern browser (Google Chrome, Firefox, Safari or IE9+). The graphic uses open SVG (Scalable Vector Graphics) content (not Flash) to show an interactive map of commuting patterns within Greater London (just mouseover the map to see dynamically-generated ‘flows’)

One of the reasons Flash has been so popular in recent years has been its better performance when dealing with complex animated/interactive content. But this map is easily handled by modern browsers (under Google Chrome, in particular, it flies along) – the excuse to use Flash for this kind of content is diminishing. Even better, because the content is based on open W3C technologies, it will work on any compatible browser, including mobile devices (e.g iOS 5+, Android 3+). Given the recent abandonment of mobile Flash by Adobe and the momentum towards greater mobile browsing, the rise of open standards for data graphics seems irresistible. And as a final bonus, there are some great visualisation libraries being put together which will make producing data graphics using these technologies even easier.

Here at ONS’ Data Visualisation Centre, we loved SVG a decade ago – so we’re really looking forward to re-working some of our existing Flash-based graphics back towards HTML5/SVG in the coming year – I’ll try and reflect on some of the experiences of doing this in a later post.

In a interactive tool, Your Better Life Index, OECD enables participants to rate their country on the things they feel make for a better life.  ‘ The Index allows citizens to compare well-being across 34 countries, based on 11 dimensions the OECD has identified as essential, in the areas of material living conditions and quality of life’.

More about this initiative and esurvey on OECD’s website.

In the past nobody was perfectly right in predicting the future of (communication) technologies. This does not prevent from crystal ball gazing. It’s always  exciting!

And so Envisioning technology from Stockholm, Sweden did it and got an impressive sketch:

Interesting: linked data is mentioned within the interval 2011 to 2015.
Disappointing: interplanetary internet is far away -;) (Who will use this? In the Space elevator!)

‘“Envisioning technology” is a work in progress, researched and designed by technologist Michell Zappa.‘

Dip into the past

Internet (r)evolution documented in the light of various manifestos . 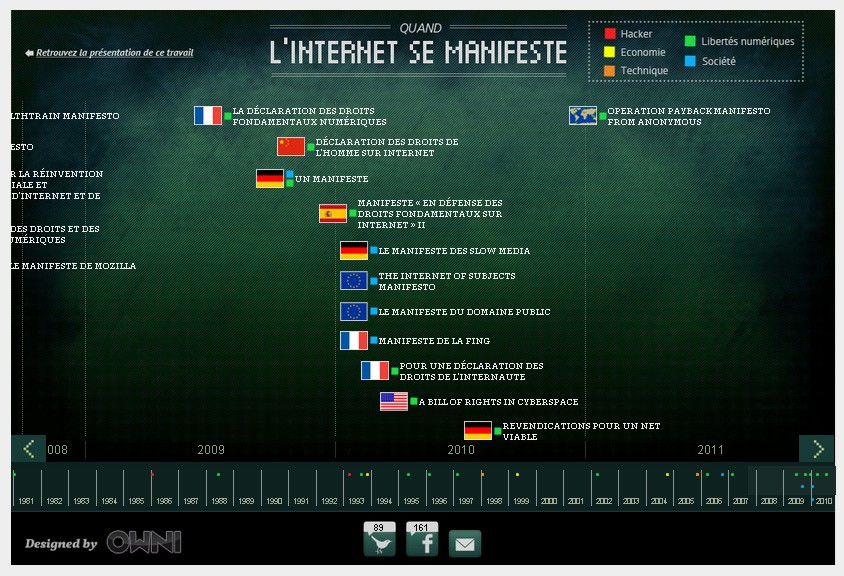 OWNI presents its mission: ‘OWNI is a social media which brings you the very best news and prospective ideas on the ever-changing digital age – today in France, tomorrow all around Europe’. (English: http://owni.eu/. French: http://owni.fr/). OWNI gets money not from selling news but from developping apps for news, like the above internet timeline.

If you’ll find some time over the next few weeks to look at some interesting webpages here a hint showing new developments in browser technology:

To see this you have to enable WebGL. This is posssible in Firefox 4 (put ‘about:config’ instead of a URL, filter to webgl and change webgl.enabled_for_all_sites to true) and Chrome 8 (put about:flags in the URL bar and activate WebGl).

And then you can play around .

Another reason why the browser will survive  the social-media driven advance of apps (be it iPad’s or facebook’s) is its evolution.

One of these evolutionary paths is the new browser standard HTML5 .

Another evolutionary path is melting the classic all-purpose browser with apps. And this is what RockMelt ist trying to do – and perhaps Internet Explorer and Chrome soon too.

RockMelt is a new kind of browser melting classic browser navigation with social-media functionalities. It’s one-stop-shop browsing.  ‘A browser isn’t just a tool for looking at websites. It has the power to shape the experience of being online. A new browser, Rockmelt, is built to show the Web through the prism of your online contacts. Social features literally frame every page the user views, meaning that every page view is surrounded by tools that let users share it with social networks, see which friends are online, and get updates from social networks.’  Read the discussion about RockMelt in Technology Review ‘A new Facebook Browser Faces an Uncertain Future’.

About 10 years ago, one theme in particular came to the forefront of discussions: storytelling and its role in the dissemination and communication of statistics. Storytelling is a programme to make the results of official statistics accessible and understandable to people and – in fulfilment of an information mandate – to make “evidence based decision making” possible.

Looking back, it becomes apparent that storytelling meant, and still means, many different things to statisticians. The goal is largely undisputed, but the implementation varies widely and is influenced by developments in the media sector.

Where are we today? What and where is the potential of the storytelling approach in the world of the social and semantic web?

The goal of the following paper is to make an inventory of what storytelling comprises,what role storytelling plays within the framework of official statistics and which challenges official statistics face in view of the rapidly changing media environment.
This paper is the contribution of the author to the International Marketing and Output Database Conference IMAODBC 2010 in Vilnius. 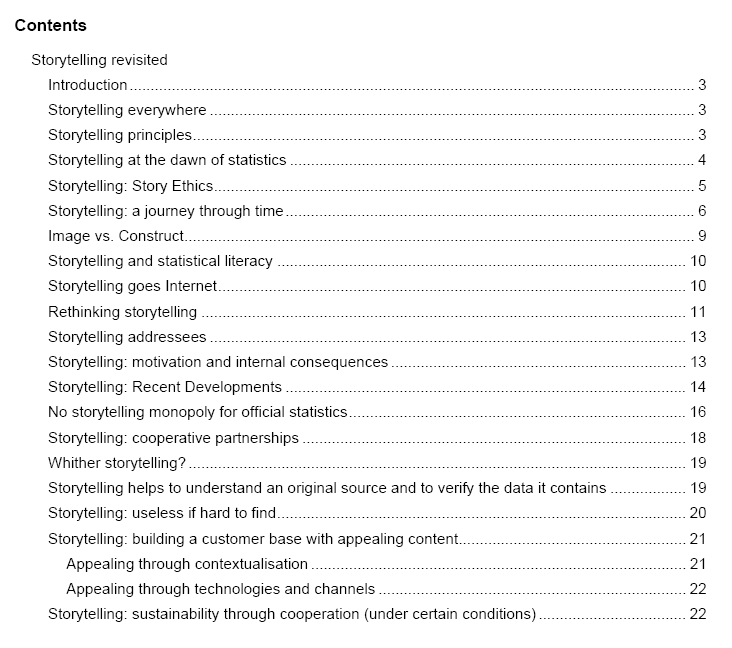 Should Governments and also Statistics Offices use Web 2.0 in their dissemination and communication activities? What about risks and benefits?

In a short but well organised conference (style BarCamp) in Switzerland David Osimo made a very informative presentation followed by some workshops.

His slides on slideshare

His remarks after the BarCamp in the Blog ‘Benchmarking e-government in web 2.0’.

David Osimo from Tech4i2 Limited has a long experience in Web and Gov 2.0 and has written in 2008  an extensive report about this topic: 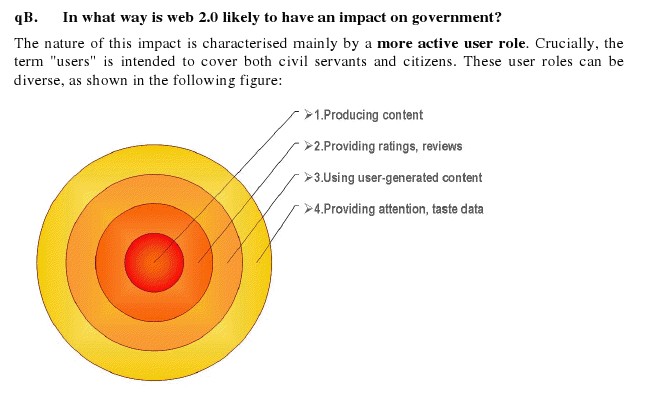 Blog about Stats
Create a free website or blog at WordPress.com.