Hermann Burger, the so versatile Swiss writer once noted: “To be a writer means to have language beyond death”.
For Hans Rosling (1948-2017), working hard to make statistics not only understandable but also respected and used, this is equally true. Once thanks to his bestseller ‘Factfulness‘ and now also thanks to a newly launched idea: “The Project Rosling”.

Project Rosling has its origin in the UN World Data Forum in Bern (October 2021) and wants to continue the spririt of this event. The project website paraphrases this as follows: ‘The Project Rosling aims to bridge the gap between the data and statistical community and a diversity of stakeholders to advance data ecosystems and provide the information needed for a fact-based worldview’.

And in even more detail: ‘The Project Rosling follows the Road to Bern, an initiative of the Swiss Confederation that aimed to prepare discussions before the 3rd UN World Data Forum 2021 in Bern and to engage the public in the 2030 Agenda (more information here). Over one and a half years, conferences, debates and activities with the general public created a momentum within the data and statistical community that the Project Rosling will seek to maintain and expand.
As such, it has two aims:
> Expand the data and statistics dialogue
> Deepen knowledge’
(-> go to source)

This meritorious project and its ambitious mission recall and continue what Hans Rosling pursued in his life and what was his interest and project. In an interview in 2013 he expressed himself as follows: ‘My interest is not data, it’s the world. And part of world development you can see in numbers’.

‘Fake-news’ and ‘post-truth’ (postfaktisch) are the words dominating today many discussions about truth in communication.

False information or even lies are not new in the information business. And therefore many, and many more websites help to separate wrong from right:

The Reporters’ Lab maintains a database of global fact-checking sites.

And Alexios Mantzarlis ‘collected 366 links, one for each day of the year …  to understand fact-checking in 2016′.

Officials Statistics collect, analyze and disseminate statistical information since long and are also confronted with wrong citations, misuse of statistics and lies. Many of the ethical codices of official statistics recommend acting against such false information.

‘In 1992, the United Nations Economic Commission for Europe (UNECE) adopted the fundamental principles of official statistics in the UNECE region. The United Nations Statistical Commission adopted these principles in 1994 at the global level. The Economic and Social Council (ECOSOC) endorsed the Fundamental Principles of Official Statistics in 2013; and in January 2014, they were adopted by General Assembly. This recognition at the highest political level underlines that official statistics – reliable and objective information – is crucial for decision making.’

Two paragraphs are of special interest:

To retain trust in official statistics, the statistical agencies need to decide according to strictly professional considerations, including scientific principles and professional ethics, on the methods and procedures for the collection, processing, storage and presentation of statistical data.’

The statistical agencies are entitled to comment on erroneous interpretation and misuse of statistics.’

The European Statistics Code of Practice says in principle 1:

1.7: The National Statistical Institute and Eurostat and, where appropriate, other statistical authorities, comment publicly on statistical issues, including criticisms and misuses of statistics as far as considered suitable. 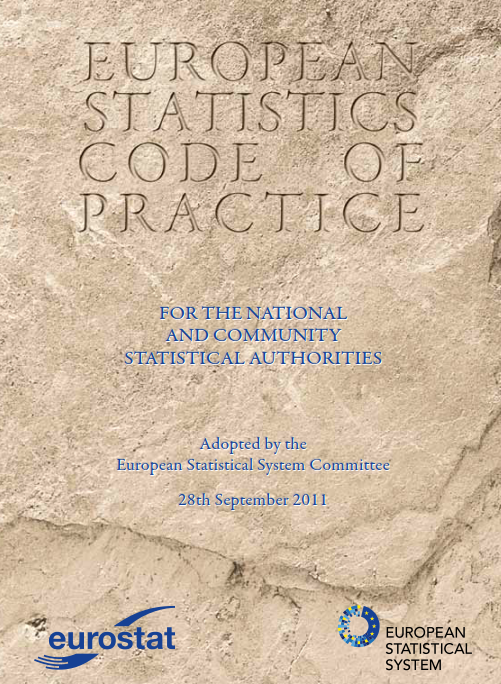 N.B: Wikipedia’s page on Misuse of statistics presents a broad view how readers can be fooled by many types of misuse.

False – and especially deliberately false – information as a weapon in manipulating decisions isn’t new either. But new is how such information spreads: with the help of social media dissemination gains a new level  (some say like earlier Gutenberg’s printing press ).

Anne Applebaum gives a practical illustration of how it can work:

‘I was a victim of a Russian smear campaign. I understand the power of fake news.

It was a peculiar experience, but I learned a lot. As I watched the story move around the Web, I saw how the worlds of fake websites and fake news exist to reinforce one another and give falsehood credence. Many of the websites quoted not the original, dodgy source, but one another. There were more phony sites than I’d realized, though I also learned that many of their “followers” (maybe even most of them) are bots — bits of computer code that can be programmed to imitate human social media accounts and told to pass on particular stories.
….
But it is also true that we are living through a global media revolution, that people are hearing and digesting political information in brand-new ways and that nobody yet understands the consequences. Fake stories are easier to create, fake websites can be designed to host them, and social media rapidly disseminates disinformation that people trust because they get it from friends. This radical revolution has happened without many politicians noticing or caring — unless, like me, they happened to have seen how the new system of information exchange works.’

May 2017 become the year of people who know about the power and the dangers of misleading information!
My best wishes to the colleagues in Official Statistics and their professional producing and disseminating information …. and perhaps statistical dissemination will need to be more active on social media, too.

Not long ago in Official Statistics the topic ‘Big Data’ was mostly discussed in a theoretical manner.

However, now more and more real, and solid examples appear and demonstrate how Big Data work and what their outcome could be.

Some of these examples come from (Official) Statistics. These institutions use Big Data as a source and start applying a new analytical paradigm.

‘Global Pulse is a flagship innovation initiative of the United Nations Secretary-General on big data. Its vision is a future in which big data is harnessed safely and responsibly as a public good. Its mission is to accelerate discovery, development and scaled adoption of big data innovation for sustainable development and humanitarian action. … Big data represents a new, renewable natural resource with the potential to revolutionize sustainable development and humanitarian practice.’ –>

See some examples of using Big Data below:

‘This paper outlines the opportunities and challenges, which have guided the United Nations Global Pulse initiative since its inception in 2009. The paper builds on some of the most recent findings in the field of data science, and findings from our own collaborative research projects. It does not aim to cover the entire spectrum of challenges nor to offer definitive answers to those it addresses, but to serve as a reference for further reflection and discussion. The rest of this document is organised as follows: section one lays out the vision that underpins Big Data for Development; section two discusses the main challenges it raises; section three discusses its application. The concluding section examines options and priorities for the future.’ 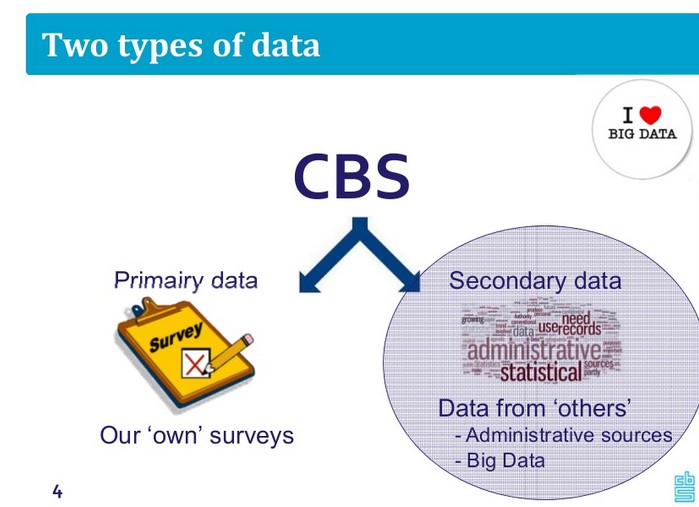 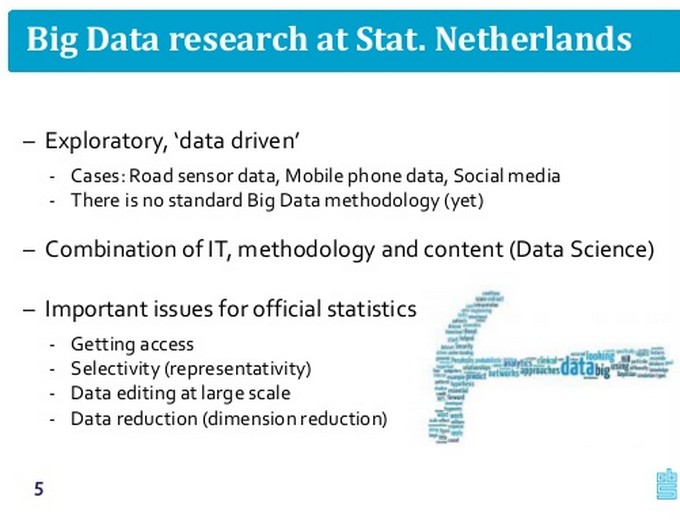 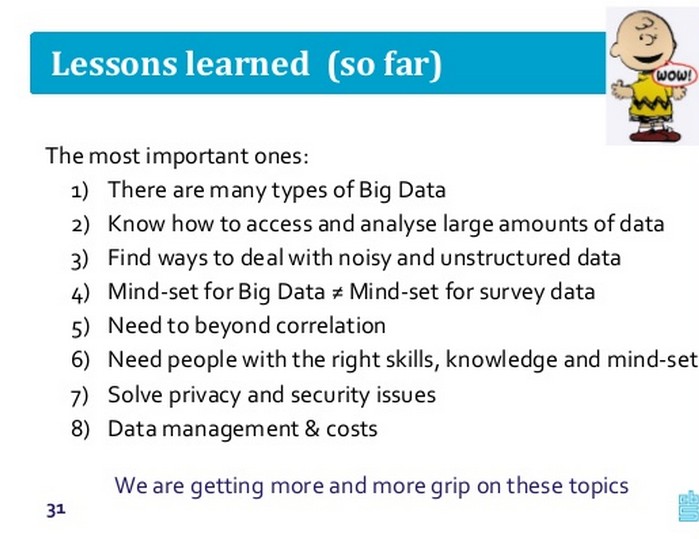 Example 3: Report of the Global Working Group on Big Data for Official Statistics

In March 2015, the forty-sixth session of the UN Statistical Commission received a report about Big Data in Official Statistics:

‘The report presents the highlights of the International Conference on Big Data for Official Statistics, the outcome of the first meeting of the Global Working Group and the results of a survey on the use of big data for official statistics.’ …

‘The potential of big data sources resides in the timely — and sometimes real‑time — availability of large amounts of data, which are usually generated at minimal cost.  …. before introducing big data into official statistics …. it needs to adequately address issues pertaining to methodology, quality, technology, data access, legislation, privacy, management and finance, and provide adequate cost-benefit analyses.’

A dedicated wiki offers an overview of the ever growing activities in the field of Official Statistics and Big Data. It’s managed by the Geneva Office of UNECE.

‘Better Data. Better Lives’ is a very well made video about the role of statistics. Everybody agrees that data are necessary for evidence based decisions and progress. But all communication work has to deal with the problem that striking examples demonstrating this connection are not easy to be presented. Perhaps in the next video? 😉

The 46th session of the United Nations Statistcal Commission from 3 to 6 March 2015 at UN Headquarters in New York will deal with a report on broader (and better) measures of progress. This ‘report presents a roadmap for the development and implementation of an indicator and monitoring framework for the post-2015 development agenda. In particular the report discusses the development of the post-2015 indicator framework.’

The new development agenda of UN

To know people’s priorities and views for a better life is the aim of the global survey lead actually by the UN.

The results will help defining the next development agenda for the world after the Millenium Development Goals MDG.

Results of My World Survey by April 2014

Statistical information is frightfully boring, it doesn’t regard me as a person! Yes and no. Yes, official statistics is not interested in a single person, data protection forbids this. But no, on a aggregated level we can find a lot of knowledge about our own situation. Interactive applications offer this.

There’s a quite new own from UNESCO Institute for Statistics (UIS). ‘UNESCO is making data count for the millions of children still being denied their right to education by benchmarking and monitoring global progress on education-related Millennium Development Goals and Education for All targets.’
Mind the Gap, a new online tool highlights the situation of girls and women in education.

But my favourite from a presentation view is still the Australian Census Spotlight, the new version with a personal infographic and social media link. Why? Perhaps it’s because there’s a speaker helping me navigating the information and leading me to some insights about the group of persons I belong to. 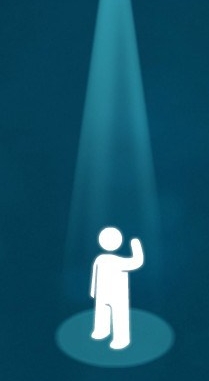 Open Data is meant as an invitation to use the data by third parties.

‘Public participation and collaboration are key to the success of open.undp.org. Here are some ways you can get involved:

There’s an API to make this possible and several download formats:

‘The data used on this site is free to use under the Creative Commons’ Attribution License (CC-BY) and available in the following formats.

Use the following collection of API endpoints in your application or download the source.

Latest data in IATI Data format is available at http://www.iatiregistry.org/publisher/undp.&#8217; 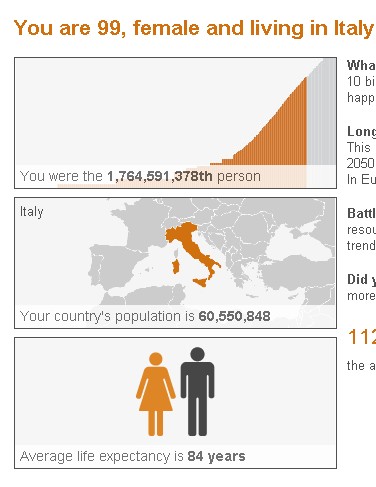 ﻿An interesting application with a lot of functions. Click on picture below or read more at Access to Statistics.

In Italy there will be taken a interesting initiative in organising a BarCamp for the World Statistics Day.

This form allows members to participate in a number of different workshops.

The overall topic of these workshops is:

Get more information (in Italian) starting on Vincenzo Patrunos Blog

On October 20 2010, the World will celebrate the first World Statistics Day.