Communication of statistics in times of fake news

In a recent paper Emanuele Baldacci, (Director, Eurostat) and Felicia Pelagalli, (President, InnovaFiducia) deal with the ‘challenges for official statistics of changes in the information market spurred by network technology, data revolution and changes in information consumers’ behaviours’ (p.3) 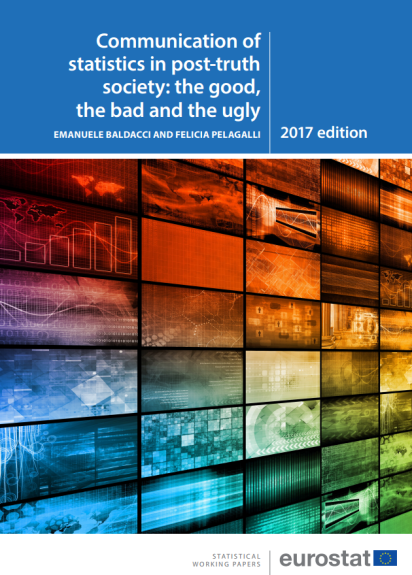 The status-quo or bad scenario:

‘Information will continue to be consumed via multiple decentralized channels, with new information intermediaries emerging through social platforms, digital opinion leaders, technologies that reinforce belonging to peers with similar profiles and backgrounds, including in terms of beliefs.’  … ‘Under this scenario it is likely that increased competition from alternative data providers will put pressure on the official statistics position in the information ecosystem and lead to drastic reduction of public resources invested in official statistics, as a result of the perceived lack of relevance.’ (p.8)

‘Big oligopoly giants will emerge by integrating technologies, data and content and providing these to a variety of smaller scale platforms and information intermediaries, with limited pricing power for further dissemination. In this scenario, data generated by sensors and machines connected to the network will increasingly create smart information for individuals. However, individuals will not participate in the data processing task, but will be mostly confined to crowdsourcing data for digital platforms and using information services.’
‘In this scenario, official statistics will be further marginalized and its very existence could be put in jeopardy. More importantly, no public authority with significant influence could be in charge of assessing the quality of data used in the information markets. Statistics as a public good may be curtailed and limited to a narrow set of dimensions. …  Official statisticians will appear as old dinosaurs on the way to extinction, separated from the data ecosystem by a huge technology and capability gap.’ (p.9)

The authors do not stop here. They also see a good scenario, but a scenario that implies a huge engagement.

This scenario is ‘predicated on two major assumptions.
First, the information market will be increasingly competitive by sound regulations that prevent the emergence of dominant positions in countries and even more important across them.
Second, official statistics pursue a strong modernization to evolve towards the production of smart statistics, which fully leverage technology and new data sources while maintaining and enhancing the quality of the data provided to the public.
In this scenario, official statistics will generate new more sophisticated data analytics that cater to different users by tailored information services. It uses network technologies (e.g., blockchain, networks) to involve individuals, companies and institutions in the design, collection, processing and dissemination of statistics. It engages users with open collaborative tools and invests heavily in data literacy to ensure their usability. It strengthens skills and capacity on statistical communication to help users understand in transparent manners what are the strengths and limitations of official statistics.’ (p. 9/10)

Actions needed to face the challenges ahead

The good scenario already depicts some needed actions to be taken by official statisticians. The authors conclude with proposals that are not really new, ideas that have been on the table for some time but are not so easy to implement.

‘It is important to change mindsets and practices which have been established, in order to put in contact the citizens with official statistics, to make data accessible, to expand the understanding of their analysis, to support individuals, business and institutions in the decision-making process.

The key issue is how to be authoritative and to develop quality knowledge in the new and changing information market. It is important to know the rules and languages of the media platforms used for communication; to overcome the technicalities; to tell stories close to the people; to create communities around specific themes; to develop among citizens the ability to read the data and
understand what is behind the statistical process. In summary, put people at the center (overused phrase, but extremely valuable):
⎯ communicate statistics through engaging experiences and relevant to the people who benefit from them;
⎯ customize the content;
⎯ adopt “user analytics” to acquire the knowledge of the “users” through the analysis of data (web and social analytics) and the understanding of people’s interaction with the different platforms.’ (p.11)

And the concluding words call for external assistance:

‘It will be essential for statisticians to build more tailored data insight services and team up with communication experts to play a more proactive role in contrasting fake news, checking facts appropriately and building users’ capacity to harness the power of data.’ (p.12)

4 thoughts on “The Good, the Bad and the Ugly”